The Semantics of Line Drawings III, Appointing a Representative

Here's a not very good picture taken from my bedroom window: 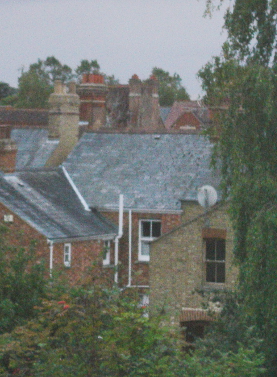 You can see that the walls of the houses are brick, and just about see the individual bricks. Suppose that you wanted to draw this in black and white. Drawing all the lines between the bricks would make the drawing look "busy", as would shading each brick to indicate its tonal value. So if you want to indicate that there are bricks in the wall, what do you do? One possibility is to apply a transformation that I call "appointing a representative".

You draw just a few patches of bricks, leaving the viewer's brain to fill in the rest. These patches are representatives for the rest of the bricks.

This transformation can be thought of as a two-step process. In the first step, draw all the bricks. Unfortunately, this overemphasises them relative to the rest of the drawing. So in the second, reduce the "brick level" until they are no more prominent than in the photo.